What is a Food Bank?

A food bank is a civil society organization which collects, sorts, stores and distributes to people in need the food, clothing, cleaning and hygiene products donated.

Companies and people “deposit” these food, clothing and cleaning products in a “bank”, and people in need “withdraw them from the bank”.

The Birth and Logic of Food Banking

The idea of food banking was born in Phoenix, Arizona in 1967.

Serving at a soup kitchen as a volunteer who devoted himself to helping the poor, John van Hengel noticed a woman going through a trash bin in the soup kitchen while handing out food. The woman looked after her children on her own, and told him that she made use of the available food supplies among the wastes of supermarket and soup kitchen to feed them.

Van Hengel realized that there were hungry and poor people on the one hand, while, on the other hand, there were tons of products wasted and disposed of when they could have actually been used, due to damaged packaging or products expiring soon. Drawing attention to this contradiction, John van Hengel persuaded the supermarkets and producers in his area to deposit these products in a free-of-charge distribution storage and started the first food bank.

Currently, there are nearly 30,000 thousand food banks that distribute 540,000 tons of food to 6.5 million people around the world. 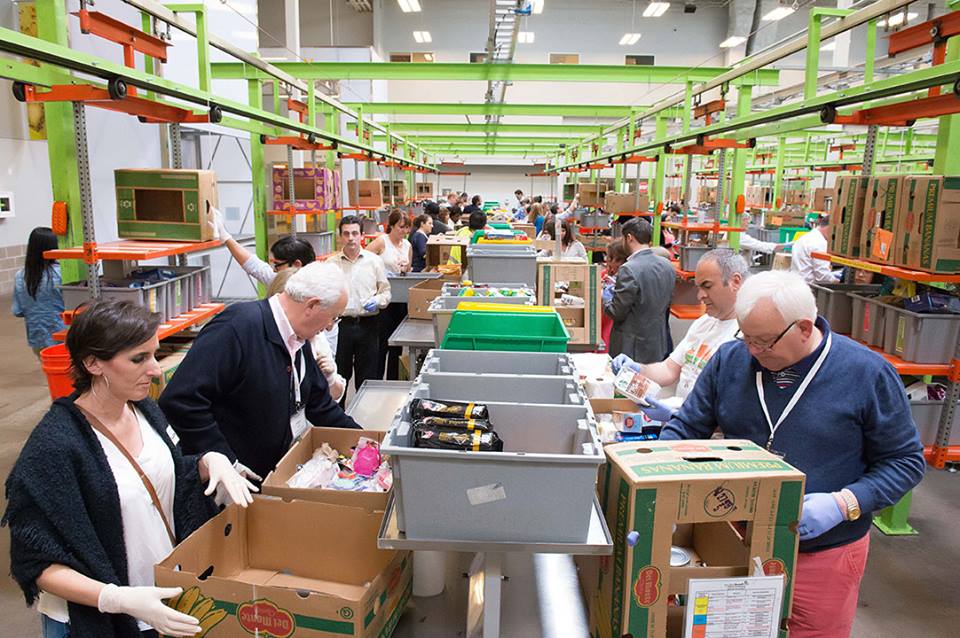 The Global Foodbanking Network (GFN), is an international non-profit organization that strives for strong and sustainable maintenance of food banking across more than 30 countries for a future free from poverty and waste. Just like TIDER, GFN believes that food banks serve as the most important instrument in solving waste and poverty problems and changing lives.

The biggest responsibility of GFN is to create a network for worldwide food banks to share their knowledge and experience by bringing them together. Furthermore, GFN reinforces food banks through capacity improvement programs so that they can pursue their journey in a more powerful and effective way.

We are proud that TIDER is the only Turkey-based certified member of this network.

As Turkey’s umbrella organization for food banking, we invite all non-profit organizations that generate and wish to generate social benefits through food banking to TIDER Network for exchange of information, experience and basic need products.

These figures indicate exactly why we need food banking in Turkey. Moreover, the incentives in law facilitate this process.

The Legal Foundations of Food Banking in Turkey

Food Banking is defined as follows as per “Law on the Enactment of the Amended Decree Law on the Production, Consumption and Inspection of Food” dated 27.05.2004:

Food banks are organizations formed by non-profit associations and foundations that collect all kinds of donated foodstuffs or production surpluses, store them under suitable conditions and distribute them to poor people or disaster victims directly or through different aid organizations.

Tax regulations were introduced to support Food Banking through amendments to the Article 40 and 80 of Income Tax Law (ITL) and Article 17 of Law no. 3065 on VAT through the “Law no. 5035 on Amendments to Certain Laws” that was published on Official Gazette with number 25334 on 02.01.2004:

Article 40 of ITL: The following provision was added: “The cost value of food supplies donated to the associations and foundations engaged in food banking will be recorded as an expense in the tax assessment finding within the framework of the procedures and principles determined by the Ministry of Finance.”

Article 89 of ITL: The following provision was added to this article which lists the discounts tax payers are entitle to make in the revenue to be notified through an annual declaration: “The entire cost value of food supplies donated to the associations and foundations engaged in food banking for aiding the poor will be deducted from the revenue notified via an annual declaration within the framework of the procedures and principles determined by the Ministry of Finance.”

Article 17 of VAT Law: The following provision was added to the article entitled “Other Exceptions and Exceptions for Social and Military Purposes” regarding food banking: “Delivery of food supplies donated to the associations and foundations engaged in food banking for aiding the poor is exempt from VAT within the framework of the procedures and principles determined by the Ministry of Finance.”

Communiqué no. 251 on Income Tax (RG No: 25409, 21.03.2004): The procedures and principles regarding the donations to be made as part of food banking are governed by this Communiqué with reference to the Law no. 5035. Accordingly, the donation must be made to an association or foundation with a provision in their legislation or bill which states that it will provide food support to people in need. In addition, the Communiqué includes subjects such as demonstration of declarations, record organization and documentation to be issues by donors and donees, as well as the goods subject to donation and the nature of donation.

The scope of food banking was expanded and a provision which sets forth that donations of clothing, cleaning, heating supplies can be recorded as an expense based on the cost value was included with the “Law on Amendments to Certain Laws and Compliance of Tax Laws with New Turkish Lira” that was published on Official Gazette Duplicate no. 25607 3. on 31.12.2004.